Pegasus Multi-Domain Can Fly and Operate On the Ground

Robotic Research LLC introduced anew multi-domain vehicle Tuesday that is capable of doing mapping or searching out chemical weapons from either the air or the ground.

The Pegasus uses four rotors to fly or thin rails with tracks similar to those on tanks to move along the ground. Ground operations offer longer missions of up to 4 hours while flight-only missions can be as long as 20 minutes. The payload capacity for the Pegasus is 2 pounds and the company is offering payloads for ISR (intelligence, surveillance and reconnaissance) and the detection of CBRNE (chemical, biological, radiological, nuclear, and explosive) materials, according to a statement.

“It’s a whole new category of robots,” said Alberto Lacaze, president of Robotic Research. “Nothing before Pegasus has had the reach or versatility of this system. We look forward to sharing this with our customersin the U.S. military, as well as within commercial sectors and areas such as public works.”

Pegasus can operate in areas where GPS is unavailable and can also function autonomously in both air or ground mode. 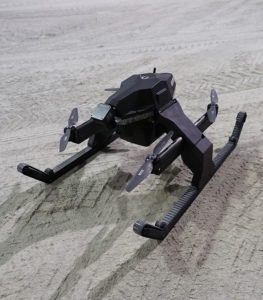 Pegasus is equipped with artificial intelligence that can perform obstacle avoidance and full 3-D mapping, said the firm. It is operated with a common controller built within the ATAK/Nett Warrior application. ATAK (Android Tactical Assault Kit) enables users to know where their team members are and supports situational awareness. The app was developed by the Air Force Research Laboratory (AFRL) and is based on an open-source virtual globe called WorldWind that was developed by NASA.

Pegasus was introduced atthe AUVSI Unmanned Systems —Defense, Protection, Security conference in Washington. USDPS brings together “military leadership, defense experts and the supply chain serving those markets to dig into how unmanned and autonomous systems are changing the landscape of military and intelligence operations and what that means for procurement, technology development and interagency collaboration, “AUVSI and Robotic Research said in a statement.

Read the full article on Inside Unmanned Systems

Tags:Defense, Pegasus, UAV
Share this article:
Please note that our website uses cookies necessary for the functioning of our site, the optimization of our site’s performance, and for analytics. By clicking “Accept”, you agree to our use of cookies and/or similar technologies.
Do not sell my personal information.
Cookie settingsACCEPT
Manage consent