Automated Bus Rapid Transit represents an innovation that promises to reduce operating costs while delivering benefits, but support is needed from transit agencies and policymakers. 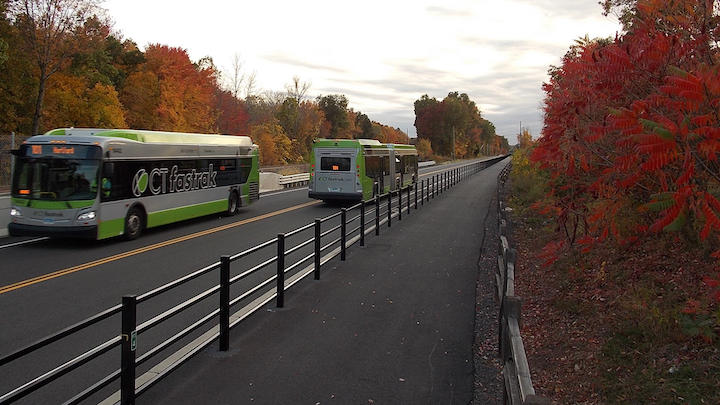 ARBT also requires action from policymakers. Policymakers need to dedicate funding, which has and remains an issue for all transit authorities, but they must also take action by creating dedicated bus lanes and synchronized traffic controls. Once established, bus platooning technology makes it easier to scale service to accommodate more passengers when needed. Platooning also can improve safety by spreading passengers among multiple buses to maintain social distancing to prevent COVID-19 exposure.

ABRT promises to improve bus transit in various ways, but there are three primary areas where automation can have a real impact on transit service: increasing efficiency, optimizing costs and improving safety.

Los Angeles Department of Transportation (LADOT). Although installed as a temporary measure to address traffic delays due to rail station closures, it had a big impact. Specifically, the research found:

“[T]he bus lane greatly improved mobility, accounting for more than 80 percent of people moving in the corridor, or around 10,000 bus riders a day during the peak-hour period. Person-throughput increased 37 percent compared to pre-traffic conditions with limited reduction of the capacity in general use lanes for private vehicles. Two-thirds of bus customers and two-thirds of operators reported time savings. This perceived time savings is consistent with observed travel times, which improved up to 30 percent throughout the corridor.”

Keep in mind, this was not with an automated bus.

Automated buses are ideal for fixed-route bus systems that operate 50 percent or more of their route on a dedicated guideway. These systems tend to have defined passenger stations, traffic signal priority and a short headway providing bidirectional services during peak hours on weekdays.

For example, the Connecticut Department of Transportation (CTDOT) is testing automated technology on its CTfastrak bus rapid transit corridor, one of its most heavily traveled routes between New Britain and Hartford. The CTDOT system uses an express bus lane for its CTfastrak service, which makes it a good candidate for automated bus technology. New Flyer buses equipped with Robotic Research’s AutoDrive® advanced driver-assistance system are being placed into service to automate features such as steering, which reduces operator stress. Incorporating a drive-by-wire system to automate control of the brakes, steering and throttle enables automated lane-keeping that helps drivers keep buses centered in the lane. This can be a real stress-reducer for operators and a technology that makes narrower lanes more practical.

Adopting ABRT offers transit authorities many cost-saving benefits, as well, especially when compared to alternative strategies such as light rail. Automated buses don’t need a dedicated rail system or a dedicated right of way. Buses can use the existing roadways, or they can use dedicated lanes to create temporary transit systems at peak times and then revert to handle normal traffic the rest of the time.

Automated buses can help reduce the amount of training required to perform difficult maneuvers, like precision docking, which is particularly useful for articulated buses where it is difficult to align the rear doors to the platform stop,by adding automating these functions. . Automated precision docking also reduces damage to vehicles and transit stops, which not only reduces repair costs but also cuts insurance costs.

Using automated controls to guide the bus for precision docking ensures that passengers with mobility devices or disabilities can board every time. Precision docking aligns the bus for level boarding for all riders and that the gap is no more than three inches in compliance with the Americans with Disabilities Act. When you consider that the Federal Transit Administration (FTA) estimates that the average BRT trip cost is $3.43 while the average cost for accessible service (i.e., demand-responsive paratransit) is $39.51 per trip, being able to accommodate more passengers with disabilities using conventional buses can generate substantial financial returns.

Automation can improve bus safety by augmenting the operator’s eyes and ears. ABRT reduces mishaps and accidents by helping the driver overcome blind spots and “see” potential hazards before there is an accident.

To increase safety and eliminate costs from accidents, automated collision avoidance systems are being installed to assist operators by providing visibility in blind spots. Imaging sensors, such as cameras, radar and LIDAR (light detection and ranging), can now generate a real-time virtual model of the area surrounding the bus, detecting encroaching traffic or pedestrians. The same technology can be used to monitor problem areas, such as rear entry doors, which can be especially hazardous.

These same sensor systems can not only alert the driver to potential obstacles, but they also can be linked to bus braking and steering using drive-by-wire installations. Avoidance and Emergency Braking (AEB) systems have become common in passenger cars and are increasingly being used in transit buses to prevent collisions with pedestrians, cyclists and other vehicles that share the road. Furthermore, automated braking and acceleration also provide smoother stops and starts which generate a more comfortable ride while reducing passenger falls.

These are just three areas where automation will transform bus transit systems. As with all robotic technology, the objective is to make the operator’s life easier. Automation enhances driver capabilities, removing stress from bus operations by offering assistance with tough tasks such as docking alignment, monitoring blind spots and supplementing bus operations with automated safety systems like AEB.

And the good news for bus transit authorities is this technology is available today. Transit operators such as CTDOT and the Kansas City Area Transportation Authority are procuring new buses and retrofitting buses already in service with new sensors and drive-by-wire technology. And as the technology continues to become more sophisticated and more cost-effective, expect to see more ABRT systems emerge in the near future.

Alberto Lacaze is the co-founder and president of Robotic Research and a recognized expert in robotic engineering.

Leave a reply Click here to cancel the reply

Please note that our website uses cookies necessary for the functioning of our site, the optimization of our site’s performance, and for analytics. By clicking “Accept”, you agree to our use of cookies and/or similar technologies.
Do not sell my personal information.
Cookie settingsACCEPT
Manage consent